NO PRESSURE | NO DAMAGE | NO RINSING

Soft washing originated in North America around 1985 in Tampa Florida.  The reason for soft washing was to develop a gentle way of cleaning roofs without the damage typically caused by pressure washing.  Over the years the soft wash cleaning method has developed and is now the only roof cleaning method approved by the North American Asphalt Roofing Manufactures Association® (ARMA).

ecosoftwash® uses a custom cleaning solution with a unique combination of biodegradable selective fungicides to target moss, mould, algae, lichen and general biological growth.  Once applied it immediately attacks those selected growths, killing even the deepest rooted spores.  These fungicides work in conjunction with a range of surfactants to help loosen and lift the biological growth.  Over the following twelve (12) months and beyond when it rains, this safe, sterilising cleansing combination reactivates to help flush the decomposing biological growth away, without scouring the surface they have infested.

Soft washing was developed out of necessity for a roof or exterior clean which would kill all mould growth including lichen for the long term WITHOUT damaging the surface . Unlike high pressure washing which has an effect similar to “sand blasting” causing surface pitting which only encourages greater mould regrowth.  Every time any surface is pressure washed it will only remove the moulds biological growth making the surface appear clean, guaranting never killing the mould spores, the heart of any mould.  As a result, within one to three years the mould infestation levels will double making the surface appear darker.

ecosoftwash® is Melbourne’s only specialist that uses this exclusive biocide cleaning method that produces a premium long term clean every time.  We achieves this by using the latest water saving, no pressure, premium soft washing technology to gently apply our eco-friendly, biodegradable (pH7) same as tap water commercial grade custom formulated mould killer to any roof or exterior surface. 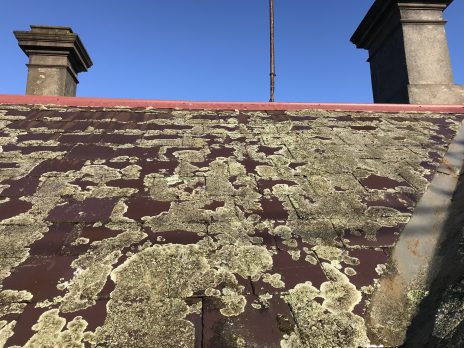 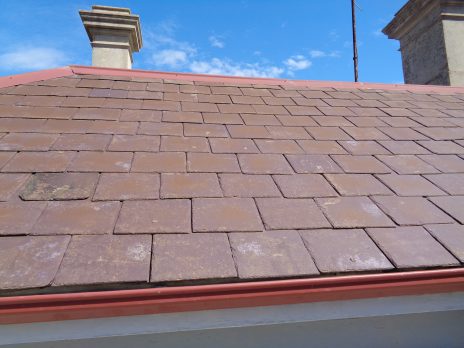 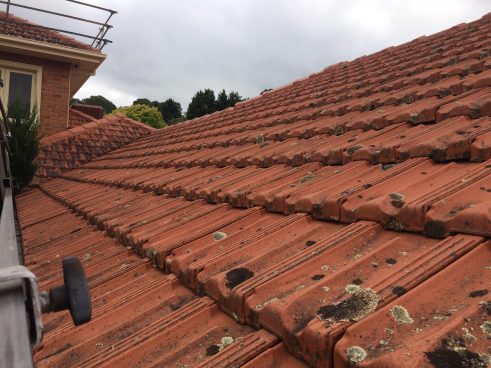 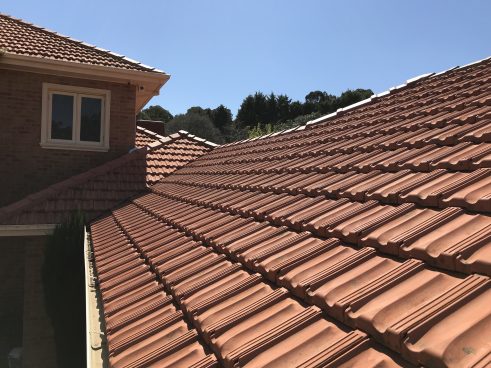 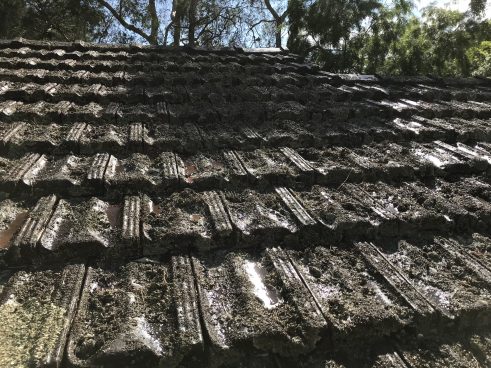 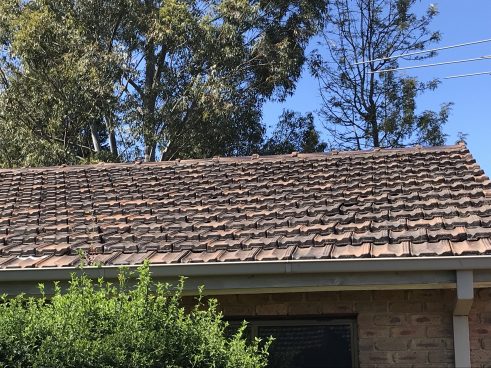 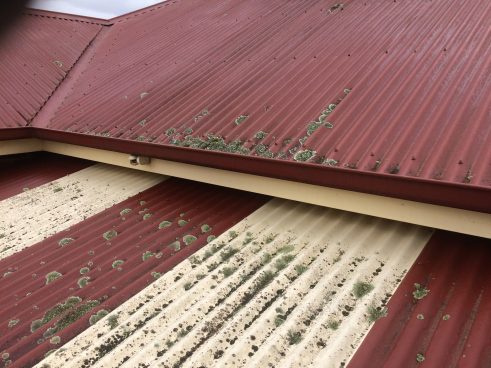 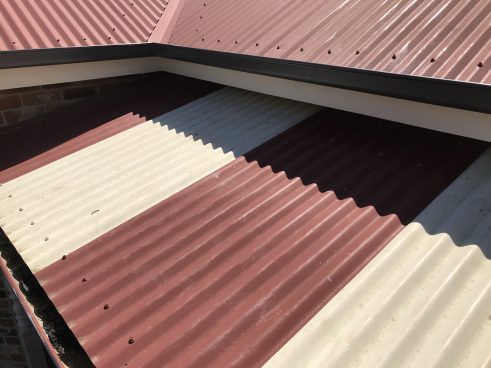 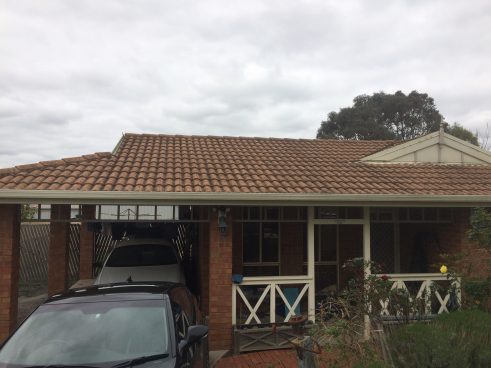 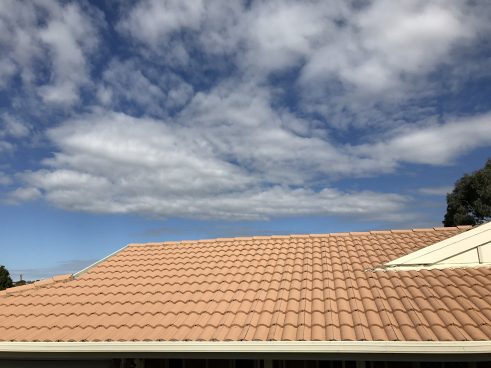 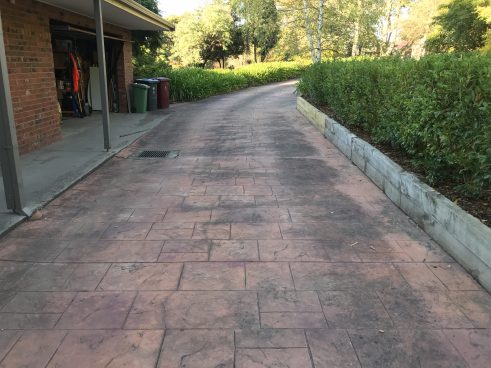 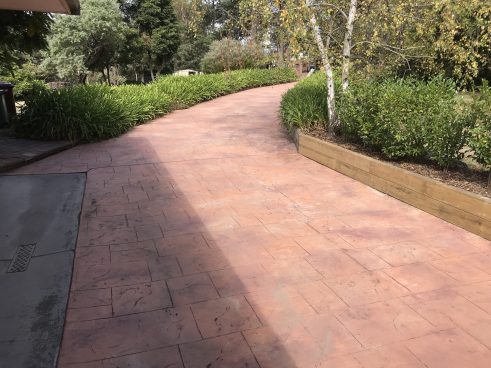 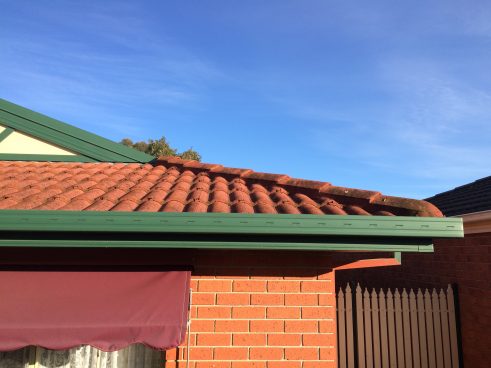 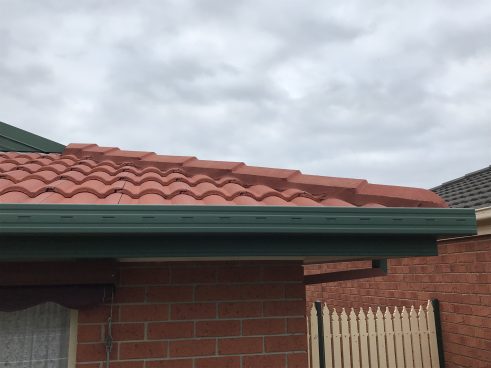 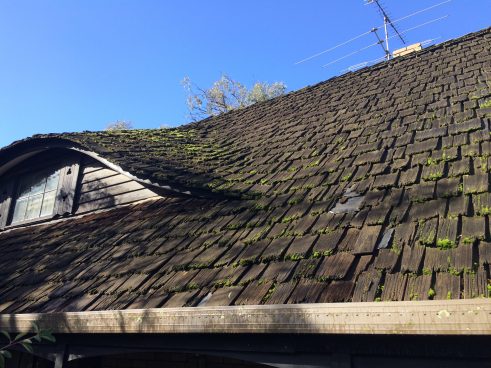 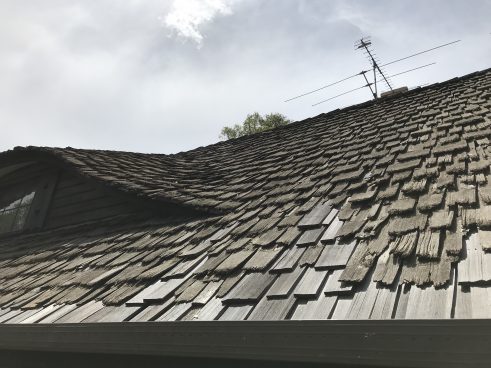 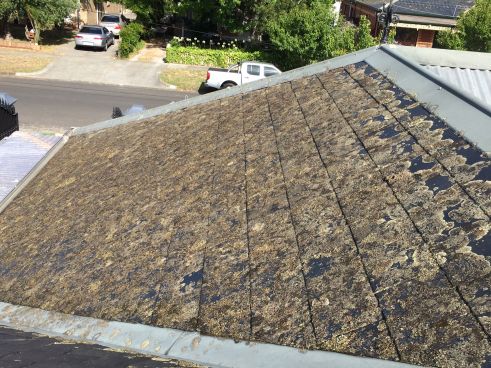 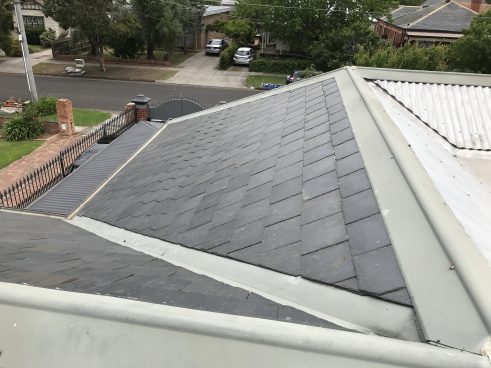 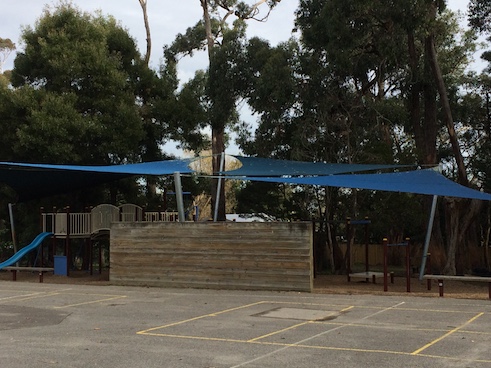 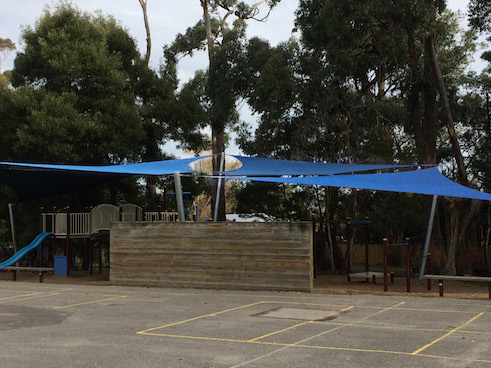 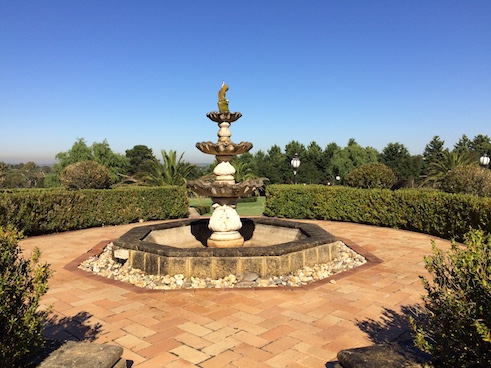 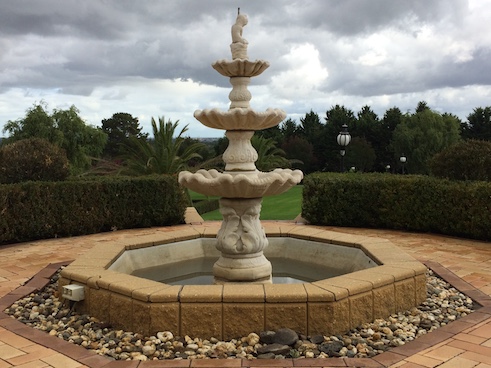 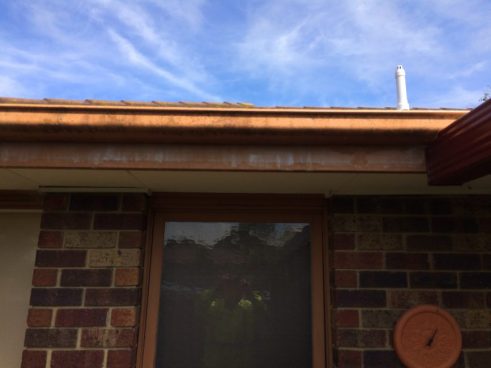 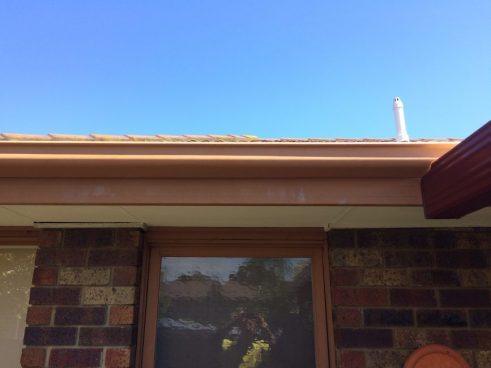 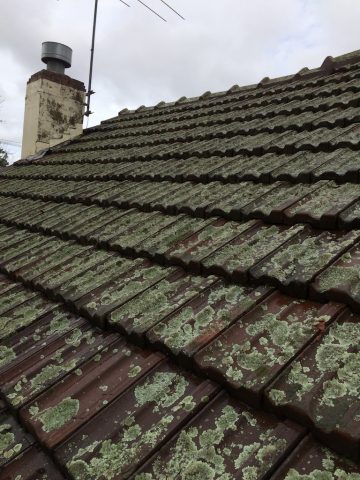 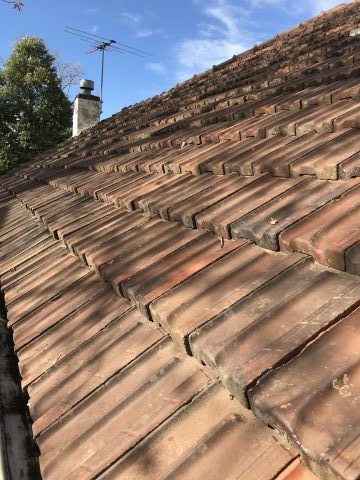 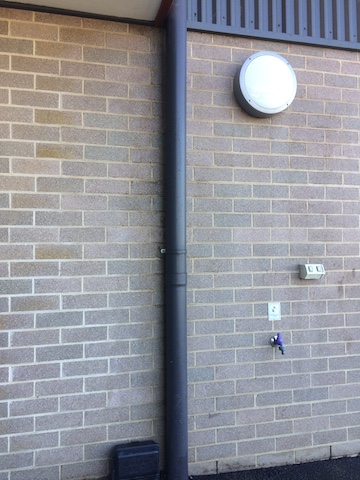 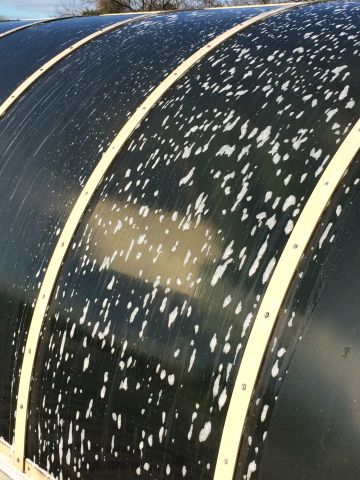 With prior experience of having our previous home’s tiled roof treated to harsh chemicals and high pressure washing by a reputable company we were keen to try a more environmentally friendly method while not risking the resultant water damage from the high pressure method. Researching many possibilities we contacted Richard at Eco Soft Wash. He was most informative in explaining the process. True to his word he arrived on the agreed date and work was completed within the timeframe quoted. He has proven punctual, personable and a trustworthy tradesman. The entire process was non-invasive, non-offensive and applied with the greatest of care. Existing tiles were checked for damage and additional spare tiles were also treated. Upon completion the terracotta roof didn’t look all that different, but as Richard explained over time the result will become obvious, true to his word, over time the roof was transformed to its original prime condition. We are confident our home now looks years younger, adding to the streetscape. Hans from Blackburn South

OMG, I cannot believe the dramatic difference!!!! What you have done is amazing and I am already thing of sending it off to my brother and anyone else I can think of. LOL, It is AMAZING!!!

Very cost effective. Extremely happy with how clean the roof is now after being soft washed. Winnie.

When it was time to clean the roof on my house, which was in pretty bad shape with black mould and lichen covering practically all of it, I had little option but to get it cleaned. The roof being of Terracotta the options were to either get it pressure cleaned or have it soft washed. I was not too keen on the former as the last time I opted for a pressure wash, whilst the roof came out very clean, it also left me with several broken tiles and I had to get the points set all over again. Considering the cost and the added work involved, I was looking for something better this time. I searched on the web and came across “EcosoftWash”. The person I spoke to got a few details from me regards the surface area of the roof and gave me an estimate. He also told me that I would not see any results for between six and twelve months. However, he assured me that depending on rainfall after twelve months the roof will look as good as new. So I opted for the soft wash. He said because the roof is Terracotta he would not be stepping on the roof. We agreed on a day for the wash and he was at my house sharp on time. He had everything ready to go and the only thing I had to supply was a power outlet. Once he started, which was at 8:00am he did not stop until after 4:30pm. He said because of the condition of the roof he had to make two and sometimes three applications in some places of the roof. With my permission he took several photographs of the roof on the day. Nearly two years on, the roof looks as good as it did when the house was built over 25 years ago. So I could not be happier with his work. I highly recommend “Ecosoftwash” and Richard for a superb product and his professionalism.

Its a great service. Richard was friendly and professional in his work.

I would highly recommend Richard from ecosoftwash.com.au not only for the great work he has done, but also for being such a great guy to deal with. From the moment I rang to organise a quote, changing the days because of expected rain, through to the job being done today - Richard has shown he is a reliable and honest person. Also I greatly appreciated that he highlighted to me a problem with my blocked drains! Thanks Richard - glad to know I have someone reliable I can call on for my annual soft wash clean.

Richard did a great job cleaning the roof, but I was also very pleased with how clean he left the areas concerned.  Would recommend ecosoftwash.com.au to all and will definitely use them again.

We are delighted with how clean our roof is after being soft washed. We welcome people to call us if they would like to know more.

Can you soft wash my pergolas clear plastic roof?

Yes, like the colorbond® roofs the results are wonderful every time.

Most definitely! Soft washing produces a wonderful result every time. Not only on colorbond® roofs but any other roof type, skylight or exterior surface.

No, we are exterior cleaning specialists.

Does soft washing require further applications a week or so later?

No. Once any roof or exterior surface has been soft washed by ecosoftwash®, no further applications are required.

Does the roof or exterior surface require rinsing once soft washed?

No. Our eco-friendly and biodegradable chemical contains no bleach or chlorine eliminating the need for rinsing. Products containing bleach or chlorine should never be used. They cause major damage to any roof surface, guttering, surrounding gardens and waterways. Bleach and chlorine based cleaners never kill the moss and mould spores, they only bleach the surface making the surface appear clean. Bleach and chlorine based products need to be applied every twelve (12) months which is wasting your money.

How long does it take to soft wash our roof?

In most cases it can be done within a day.

How long until we have to clean our roof again?

We recommend 15 years, but you’re welcome to have it cleaned more often if you desire.

Is soft washing safe for pets?

Yes, keep pets inside whilst spraying and once dry, it is safe to let your pets out.

Yes, even if used for drinking water.

On the day of soft washing will the roof look clean?

No. The objective of soft washing is to target and kill any moss and mould present on any roof or exterior surface. Mother nature will then clean the surface over time.

Once soft washed do we need to have the roof painted?

No, soft washing will remove all the moss & mould making your roof look like new eliminating the need for painting.

Once soft washed how long before the roof is clean?

Generally (subject to mould infestation and rainfall levels) it takes 12 months or so for the rain and wind to remove the dead biological growth from the roof to produce a clean exterior surface.